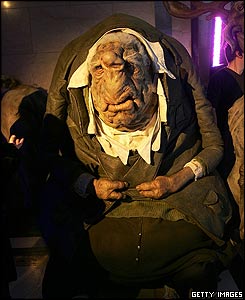 Posted by The Reverend Rushcliffe at 09:08 No comments:

The Vogon rarely puts in any appearance around the more public areas of County Hall these days, preferring to scuttle from her car to her now beautifully appointed (at tax payers expense) office on the secure "Members" corridor, from where she summons officers to receive her opprobrium on whatever subject is preoccupying her.

She is never seen tucking into the fare served in the staff dining room (Riverside Diner). The same cannot be said for some of her sidekicks. Councillors Adair, Jackson and Vincent Dobson can often be seen with trotters at the trough.

They tuck into a good meal (on expenses) for a lot less than the £5 which it is rumoured they now think "all pensioners can afford to pay" for meals on wheels.
Posted by The Reverend Rushcliffe at 13:36 No comments:

CENSORED I Wonder Why 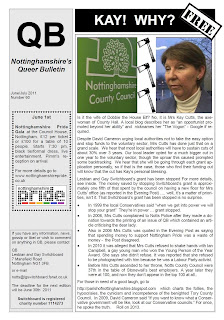 A news letter from the local gay community that has been held in local libraries on display for the last 6 years has been taken away and hidden under the counter I wounder why. (click the pic to read more)
Posted by The Reverend Rushcliffe at 13:06 No comments:

Welcome to the World of Work a Vogon Audience

A couple of interns working at County Hell were granted an audience with the Vogon herself.

After welcoming them to County Hell she continued (allegedly):

"When you leave go and find a real job. Jobs here are not real jobs. This is not real work"

On her level of expenses she would know. Interesting that a servant of the community like the vogon who parades her public service credentials allegedly holds such work in contempt.

Why is she here we ask. Perhaps the good bergers of Church Lane Cotgrave can explain.
Posted by The Reverend Rushcliffe at 12:54 1 comment:

Evidently there is a dare going around County Hell. Who will be the first to wear a Vogon mask? Thre's serious money for the first one, click here for details - it would make a good top up to the redundancy we all face after yesterday's budget.
Posted by The Reverend Rushcliffe at 14:58 No comments:

Yesterday the Conservative County Council voted through £150m in cuts against a background of a strike and demonstration by the Unions outside.

Just in case those outside find the days long and in need of of entertainment they can always attend the free pantomine kindly laid on for their entertainment by Cutts and Co. Here is a report of yesterday's highlights:

Cllr Carol (Peppa Pig) Pepper describing voluntary sector workers as 'a bunch of whingers and moaners who are only interested in looking after their own jobs'.

Cllrs Stuart Wallace and Sue Saddington having a good chuckle whilst a serious point was being made by a Labour Member about the effects of cuts on organisations offering support to victims of domestic violence.

Cllr Jason (Little Boy Blue) Zardrozny the Lib Dem Leader sneaking into the meeting at approx 7pm. Eight and a half hours late without any explanation, saying nothing in the debate and glumly half putting his hand up to vote against the Tory budget along with his Lib Dem lapdogs...Shhhhh, don't tell Cleggy!

The LibDems having it both ways (ooooer) by attacking Labour and voting against the Tories. Opportunism at its very best!

Cllr Tom Irvine (The Rockin' Reverend) maintaining 100% absence from voting at Council meetings by wandering off before the end.

Laugh, the Beano would have loved 'em!!
Posted by The Reverend Rushcliffe at 09:38 No comments:

Kay Cutts went off to see the Boy David and his pet Clegg to receive her pat on the back for decimating public services earlier this week.

While she was away three Tory members were overheard in the canteen joking about how they had just taken photos of themselves sat at her desk, doing impressions of a vogon undertaking dubious and less than flattering activities.

Won't take long for her to find out who though now.
Posted by The Reverend Rushcliffe at 13:42 No comments: