Well a few bits of gossip have emerged. Firstly the snow artist described in the article below has owned up it was him our the confessional. Obviously I cant say who it is but you would all be very very surprised, we also have a few other juicy bits from this person who clearly has some major issues with Cutts.

The tory paid adviser who was marched out of county hall early this week it is rumoured around the palace of misery that his demise was due to an indiscretion in a Bar in Nottingham at the weekend. (although this is still awaiting confirmation.)

Finally Mel (I flog off care homes) Shepherd, said that they will only sell the homes to well know and established providers in the field. One such firm that could be interested in the homes (Care UK) employs the shaddow health Secretary Andrew Landsley as a consultant, (although there would seem a clear conflict of interest). Is it just a case of look after your own again (in more ways than one!!).
Posted by The Reverend Rushcliffe at 11:36 No comments: 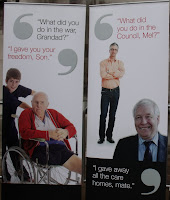 While we could write a long item about the demo against the Council Cutts and the role of our councillors held at County hall. I think the photo says more than enough about the councillor responsible for services for the elderly. Cllr Mel Shepherd
Posted by The Reverend Rushcliffe at 13:43 No comments:

Much excitement at County Hall on Monday morning when staff working in offices overlooking the members' car park, where the sun had not melted Sunday's snow, looked down to see the words 'Kay Cutts is a c**t' scraped in the white stuff. Needless to say she was not amused and apparently CCTV images are being examined to try and find the culprit.

In drawing up a shortlist of suspects she took delivery of BT's entire portfolio of Nottinghamshire telephone books on Wednesday.

Callum Heckstall Smith was sent by Conservative Central Office, shortly after the election to "help" Kay Cutts and her team of puppets and to make sure they put forward the right message. He was of course paid for by the chargepayer. Previously he had been dismissed by Parliamentary Candidates Anna Soubry and Bruce (subsidy junkie) Laughton from his paid post as "Broxtowe/Gedling campaign organiser" when they realised he was a councillor and Soubry doesn't employ councillors or other "professionals" (she prefers complete amateurs).

Yesterday (Monday), however, he was shown the door at County Hall, his lap-top confiscated before being escorted off the premises. A source close to the action tells me that he was not happy about Kay Cutts' performance on the Politics Show.
Posted by The Reverend Rushcliffe at 09:43 No comments:

Prime Minister Apologises, Cutts the Vogon should hang her head

Today the Prime Minister of the UK will follow his Australian counterpart and apologise for the appalling treatment of children when they were sent to Australia (including sexual abuse). There is a major exhibition in the palace of Wesminster to highlight this which was first uncovered by a Nottinghamshire Social worker.

The last County Council rightly planted a tree and put up an information board at County Hall. Kay Cutts had this removed immediately she got elected as it "shows Britain in a bad light" See here for the full story.
Posted by The Reverend Rushcliffe at 00:21 No comments:

Libraries are currently being closed and converted to self-service so that librarians can be made redundant and money saved.

Why stop at Libraries - thinks Cllr Jackson? The latest idea the second hand car salesman has come up with is self service gritting. This morning the No 58 bus to Arnold had to be diverted due to black ice, but I can now report the service is back to normal following gritting of the public highway by Nottingham City Transport. The advise is to carry a bag of grit if you want to use Nottinghamshire roads.

Why stop here? Soon we'll have self service schools (turn up if you want) self service hospitals (do your own operation) and self service courts (I sentence myself to 2 years). Plans are well advanced for self serve care for the elderly.

I understand the one department which will not go self service is Council Tax collection.
Posted by The Reverend Rushcliffe at 23:38 No comments:

We had a dress rehersal in Mansfield (see here) for a protest outside County Hall about the Cutts.

The main protest will be at 10:00am on Thursday 25 Feb at County Hall West Bridgford. This will precede the full council meeting where Kay Cutts expects all her puppets to vote to make the current Nottinghamshire County Council the most unpopular council ever and probably scupper any chances of the Tories taking the two key marginals of Broxtowe and Gedling.

She has asked for a special delivery of the Evening Post as by lunchtime she expects to have finished the morning papers and finds the Mail Sudoko a tad too challenging.

See you on Thursday?
Posted by The Reverend Rushcliffe at 05:26 No comments:

An attempt was made to present a petition to Tory Cllr Wendy Quigley (click here for her previous attempt at spin) about the proposed Cutts in spending. Unlike the £1000 per week from various councils in expenses she and her husband, who is also a County Councillor, are allegedly claiming, she refused to accept it. This left the hapless petitioners with no option but to ask a neighbouring County Councillor from another party to take it to County Hall. Once there he immediately ensured it was passed to Ms Quigley who had to reluctantly accept it. Protocol is that it is then presented to full council. I'll now quote a witness:

She ranted and raved about the Labour leader, even whilst she was coming down to present the petition to the Chairman. It was all most undignified. In her best Retford fish wife style, she stood in front of the elected members screeching. Throughout all this her gallant husband rather than ride to the rescue put his head in his hands and left her to her own fate.

Of course during her rant she omitted to explain the subject of the petition. Members called for her to tell the chamber, so all could hear, but she suddenly seemed rather reticent. It was left to the Chairman of the Council to utter the immortal words 'its about Council cuts'!

I understood that by this point the Tory leader Kay Cutts had reached the sports pages in the paper and was considering the crossword.

David Cameron predicts this to be a glimpse of the future in Parliament.
Posted by The Reverend Rushcliffe at 10:52 2 comments:

Who Represents North Notts (the Tories in Drag)

Who represents North Notts. Did you realise that if you voted for one of the independent councillors you may as well have voted for Kay Cutts or just not bothered at all. They once again have showed themselves to not be Independent but more or less Kay Cutts in drag.

When the key vote came for the budget at County Hell last week many of the independents walked out and did not vote. So when your services get chopped you know who to blame.

However it has been reported an unmoved Cutts thought the process so laughable she sat reading the paper while all the issues with the Cutts were discussed
Posted by The Reverend Rushcliffe at 11:18 No comments:

Blogs No More NOT QUITE

Well just in case the Blogs described in the previous item have disappeared due to computer problems. A helpful corespondent has said they have most of them saved and stored on their own computer at home.

So if the local Tories ever need to remind themselves about what they said (say for example, about what and excellent idea it is to sell off old folks homes, (especially those in prime sites for potential housing)). Just drop me a line and I may be able to helpfully post it here.
Posted by The Reverend Rushcliffe at 14:02 No comments:

Broxtowe's Tory Candidate; Anna Soubry is on record as supporting Kay Cutts and the Conservative County Council's regime of cuts. This includes the unpopular sale of a care home within her area. Like most candidates she was not afraid to stand by her statements and put them up on her web-site, archived so that we could all see her policies.

However, all this has now changed. She has now removed the archives no doubt embarrased by what she said and wishing to distance herself from the County Council regime. Ms Soubry now realises that Kay Cutts, Second hand car dealer Jackson and subsidy junkie Laughton really are causing her party such huge embarrasment and are reducing any chance of Conservative gains in Broxtowe (Or Gedling or anywhere else for that matter) to virtually nil.

Will Ms Soubry now make a statement opposing the Vogon Cutts?
Posted by The Reverend Rushcliffe at 09:12 No comments:

So its Not Just in Notts

The Bonkers Nature of tory councils is not just confined to Cutts and her self serving band of puppets.

The longstanding Tory leader (and farmer) of Essex council council (Lord Hanningfield), resigned yesterday having been caught up in the expenses scandal in parliament. It seem he was charging expenses for costly hotel rooms when in at the House of Lords on Tory front bench duty (as well as running Essex council) but was in fact going home.

Perhaps this was one perk of the job too far.
Posted by The Reverend Rushcliffe at 12:25 No comments: